A downloadable game for Windows and macOS

“as puzzles, this is an absolutely exquisite collection, with challenges that had me frequently taking a breath at how clever they were.” - John Walker - Buried Treasure

A story of love and loss, Another Tomorrow is a single-player mystery where you take photos and solve puzzles.

Another Tomorrow is a puzzle adventure that blends intricately rendered dioramas with first person exploration and puzzle solving.

Trapped without your memories but equipped with a camera you’ll explore abandoned apartments, airfields, temples, and underground facilities to search for clues, solve puzzles, and unlock secrets to answer the question; who are you?

Your head’s pounding, your body cold. The air is ripe with something all too familiar. Blood.

The odour is unmistakable. But there’s something else. Something sweet but medicinal, an intoxifying cocktail of brown sugar, ethanol, and disinfectant.

It hurts to open your eyes, the lights are bright but it’s not that. Moving hurts, like you haven’t moved in a long time.

Questions racing through your mind; where are you, how long have you been here, what the fork is that taste?

SOLVE PUZZLES WITH YOUR CAMERA 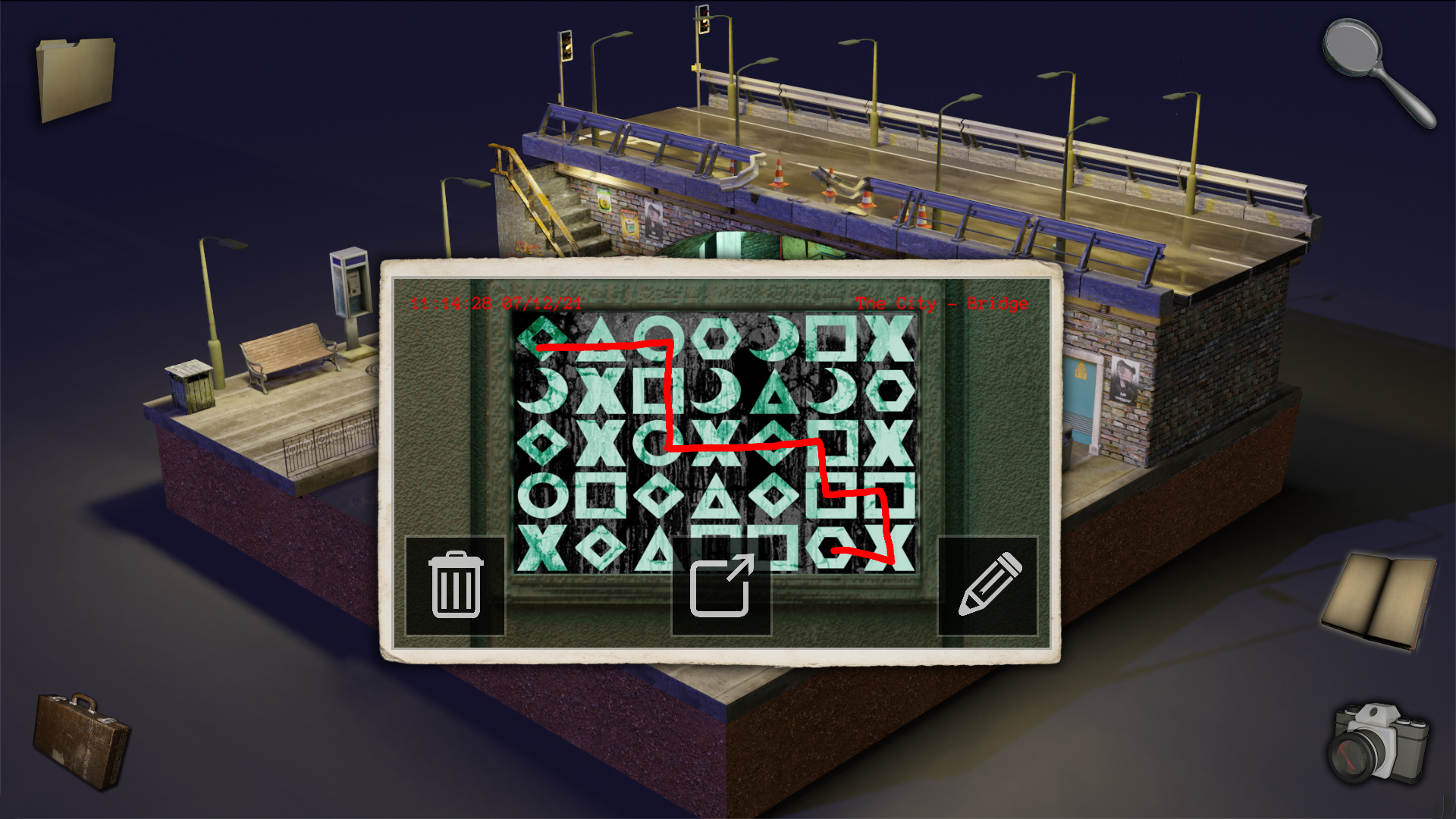 Take photos of everything you find, write notes on them, and use them to solve puzzles.

Puzzles. Puzzles everywhere. It's puzzles all the way down.

OSX - Double click the DMG and drag the application to your Applications folder. Now just load the app like any other.

If OSX throws a fit about "malicious software" just select Show In Finder and then right click the App and hit Open, then hit Open again. You'll only have to do this the first time.

If Windows Defender says no then just hit 'More info' and then 'Run anyway'.

Just finished the Demo, lots of fun but before you Release the Final product, I hope you FIX the Photo/Camera feature, when I delete Photos I no longer need, they keep coming back when I restart the game.  Thanks and looking forward to the finished product.

Sorry about the late reply! This looks to be a Windows specific issue and I think we fixed it.

Really great demo and I have it on Wishlist. But so far in the demo I am stuck like VickyJ29 in trying to find something to lift up the loose board and I have tried for 2 hours using all the clues available, I gave up and put the game aside until somebody comes along to help me advance.

Thanks for making great games and I hope everybody had a great Holiday.

Forget about requiring a hint, thankfully somebody else just posted a Video walk through of this section and I can now move on now that I have the key.

Nice little game with great puzzles, enjoyed it very much!!

Glad you liked it!

Really puts your brain to work. I had to write things down & chew on things to get through it all. Can't wait for the full release. :)

Help! Stuck at the dual clocks puzzle. Pick the right time, right? No time is left. Not sure what to do here.

Haha, hopefully we've got a good balance between frustating but fun.

I'm stuck in my(?) flat.
The computer doesn't seem to accept any dots, what about the cabinet with the greek alphabet and what to do with the glitch e-assistand device?

questions over questions in the dark ...


forget about it. I found it all!

Yay glad you solved them!

Great game, I enjoy it. I'm at the final puzzle of the demo, I think. I just need a little hint to put me on the right path. I know it involves stickers and the pictures of three people, but I don't know how it's all related.

SPOILER - Pay close attention to the note on the locked apartment door.

Stuck in demo version 1.0 and need some help. Spoilers ahead:

I made it as far as unlocking the parcel box and finding out the apartment number, but when I try to use the stairs, I just get some message about not wandering about without knowing an apartment number. Is this a bug or do I need to do something else?

Hey sorry this is a bug but there is a new version up that fixes it, please update and you should be able to continue playing straight away.

And thanks for checking it out!

Very cool. Thank you so much. I just made it to the third location (per the fast travel option). Loving the game (generously long demo) so far.

Heh! Just found out that was the end of the demo. I put the full game on my steam wishlist

Thank you and glad you liked it!

Looks great. Having some issues, though.

I went to the first new location (City?), the canal with roads on either side, went in the tunnel, backed out of the tunnel and was back in the starting location (where you use the glass on the shapes).

I turned the flashing option off at that point. Explored some more and went back to the city and was stuck there. I couldn't navigate anywhere or interact with anything but did get descriptions on mouse over. Restarting and resetting didn't help...still stuck in the city.

I reinstalled and I was still in the City with the same issues. Uninstalled and installed the new version and I'm no longer in the city and everything is working properly.

And managed to use the metal ball/chain on the wall and I'm back in the tunnel which I don't understand, although it does make sense that when I was in the city and went into the tunnel, navigating out of the tunnel put me back in the first location.

There's no music and only a few sound effects, that might not be a bug, though.

One design/QoL issue I would maybe consider would be giving access to the camera a little earlier. I cannot find a way to play in windowed mode and having to remember the squares/triangle pattern was a little frustrating. It would have been less so if I could have had the camera screen caps.

And game crashed on minimize... out of memory on 16 GB of ram.

Merci!
Really glad you liked it! All will be revealed in the full game.

Downloaded on M1 Mac with Big surr and unable to open the game. I get the following message:

"Another Tomorrow Demo.app" can't be opened because Apple cannot check it for malicious software.

This software needs to be updated. Contact the developer for more information.

This item is on the disk image “Another Tomorrow Demo.dmg”. Chrome downloaded this disk image today at 3:47 pm from glitchgames.itch.io.

Can you select Show In Finder, then right click and hit Open and then Open again.

Had a bit of trouble with the bridge location as the flashback video kept playing over and over. I got kicked out after putting out the fire but when I restarted the game it brought me back to the exact spot I was at, so no bother! I am stuck at the moment with getting the key for the apartment. looks like there is a crowbar or something in the lift but I can't get the doors to stay open long enough to reach in and I have no useful objects. I followed the clue about 'key under Mat' but couldn't find anything to interact with. I wondered if it was to do with the stickers and then decided to click the corresponding stickers on the mailboxes. All it says is that they are empty or locked. I can't find anything to lift the floorboard up either... unless it is the thing inside the lift?

Sorry, for the video issue - the ability to rewatch them was requested so I put in a setting for it in Settings ( Flashbacks > Allow Replays ) but annoyingly had it enabled by default. This has now been fixed but you may still have it enabled, so flipping it off will fix it.

For a clue, pay attention to the van outside...

Thank you!! I was supposed to getting on with some prep for Uni this morning.. Having just seen this reply, I now have other plans  😎😂

Hi! I downloaded the windows version of the game, and soon as I click play, the screen is covered by big text that says Master Audio/Volume, and has big red circles and other weird glitches. Wasn't playable at all. Also no audio, not sure if that was intentional.

Sorry about this! Can you possibly try the latest update and take a screenshot if it happens again, then send it to us - hey@glitchgames.co.uk 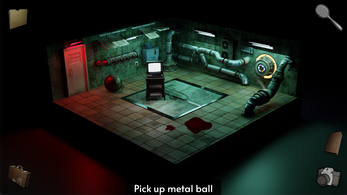 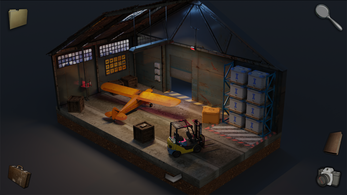 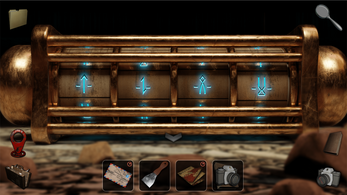 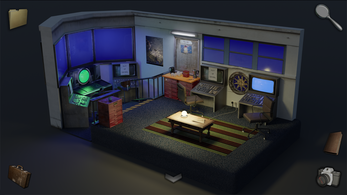 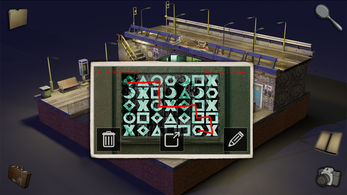 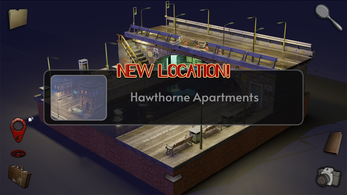